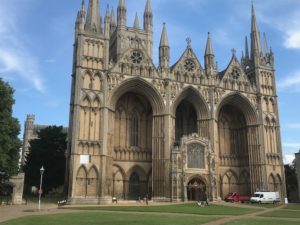 The Friends annual pilgrimage, this year, was a “fairly local” visit to the Soke of Peterborough and its St Peter’s Cathedral. Forty-four members and guests assembled at the Market Hall bus bay to board a splendid state of the art coach. The usual organiser, the indisposed Peter Raybould, was sadly absent and his heir apparent /apprentice Anthony Sharp had last been seen by this correspondent   early Wednesday p.m.   busily checking his tyres at the Sainsbury filling station.

The outward journey took us to the A14 at Kelmarsh and then eastwards and north eastwards passing the turn off to Nassington with   a clear glimpse of Fotheringhay Church in the distance and then eventually the Cathedral dominating the skyline of Peterborough where eventually Tracey Snooks from the Peterborough Tourist Office met the bus and gave a formal welcome.

Armed with tourist guide book we followed her to the Cathedral precincts and the imposing medieval West Front of the   building dedicated to St. Peter, St. Paul and St. Andrew where their statues stood, Groups or individuals then set off on their free time excursions.

Your correspondent’s explorations took in a route down to the river Nene where much waterside residential development was happening and then a stroll alongside admiring the ducks and swans. After the adventure of the missing cardigan the next venture was to head across the Nene towards” Rail world”, being treated en route to one of the LNER expresses thundering over the iconic railway bridge.

Time allowed an exploration of the nearby streets and led to” Yorkshire House”, a fine building, and close by the Art Gallery and Museum with an interesting exhibition of work. A visit to the adjacent St. John the Baptist church was curtailed by locked doors so an exploration around the perimeter gardens of the Cathedral was made returning to rendezvous with the rest of the party.

We were spilt into three separate groups for a detailed and most informative explanation about the  origins and history and current use of this fine building.

There was much to admire: the light, few stained-glass windows, the uninterrupted view the   length of the knave, the cleaned stonework, the short prayer sessions on the hour, the fabulous artistic intricacies of the painted and vaulted ceilings, the misericords and the Norman style arches.

The Hedda stone; the memorials to Catherine of Aragon and Mary, Queen of Scots and the marble high altar a late Victorian addition in the style of The Albert Hall were other features pointed out.The informative talk also told of the deeds of Hereward The Wake, the actions of King Henry V111, in reducing the size and power of the Diocese of Lincoln this creating Peterborough and Oxford and the damage during the English civil war and   the Commonwealth rule of Lord Protector Oliver Cromwell .The tour ended outside the West Door  and the appreciative applause indicated the quality of the tour guides presentations .The party then strolled over to the nearby Becket’s Chapel for refreshments with a light afternoon tea. Several members availed themselves of left overs in” doggy bags”  emergency rations in case a calamity saw us marooned near the A1 link on the return trip?

In fact, the journey was the more familiar route  out of Cambridgeshire and   through NE Northants towards Corby, and then eventually the A427, via Brampton Ash and Dingley and a safe return to Market Harborough.

A visit I hope was enjoyed by all and our thanks to John Gilding, and Anthony Sharp, who helped, and were instrumental in the successful   organisation of this pleasant and rewarding day out.

Well done and thank you and as band leader Henry Hall used to sign off on Radio, “Here’s to the next time”!  But where?

This website uses cookies to improve your experience while you navigate through the website. Out of these cookies, the cookies that are categorized as necessary are stored on your browser as they are essential for the working of basic functionalities of the website. We also use third-party cookies that help us analyze and understand how you use this website. These cookies will be stored in your browser only with your consent. You also have the option to opt-out of these cookies. But opting out of some of these cookies may have an effect on your browsing experience.
Necessary Always Enabled
Necessary cookies are absolutely essential for the website to function properly. This category only includes cookies that ensures basic functionalities and security features of the website. These cookies do not store any personal information.
Non-necessary
Any cookies that may not be particularly necessary for the website to function and is used specifically to collect user personal data via analytics, ads, other embedded contents are termed as non-necessary cookies. It is mandatory to procure user consent prior to running these cookies on your website.
SAVE & ACCEPT